Nearly two years ago, I conducted a simple, legal, marriage ceremony for Sasha and Seang. Sasha’s family is from Canberra and Seang’s from Laos. They wanted to have celebrations which involved both families. That wish was fulfilled early this year in Laos. I asked Sasha for some photos of the Laos celebrations. She provided the photos together with the explanation below:

‘Sasha and Seang’s marriage was celebrated in a traditional Laos Ceremony on the 29th of January, a day deemed auspicious by the village elders.
A traditional ceremony consists of a Baci ceremony also known as sou khan which is a good luck ceremony conducted by village elders and witch doctors to call upon the good spirits to bring good luck for the bride and grooms future and the family.
The ceremony involves chanting by the master of ceremony called the mor phon, the egg feeding where the bride and groom need to feed each other a blessed boiled egg and then the tying of white strings around the couples wrist by members of the community to bind their good luck.
At the end of the baci, the elder relatives lead the couple to somma (a customary asking for forgiveness and thanking of parents and elder relatives of both parties). This process involves the giving of small money gifts (wrapped inside banana leaves, together with flowers and a pair of candles). During this ceremony, the elders, including the parents and relatives of both parties, give the couple good wishes.
After the ceremony the couple and the village celebrate the union with traditional Lam Vong dancing and a huge feast prepared by the women in the village.’ 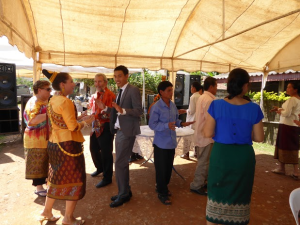 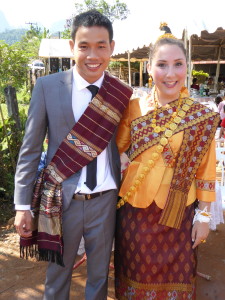 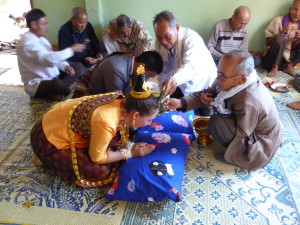 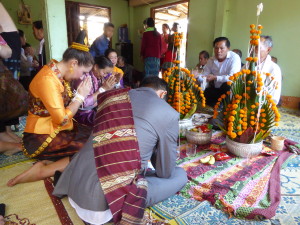 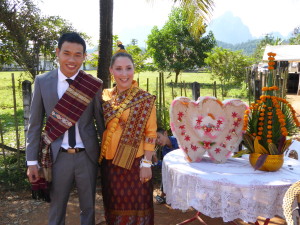 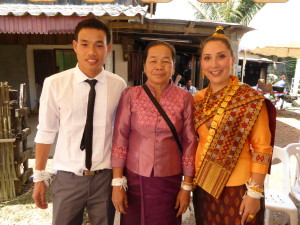